So I did tell you that I was determined to get another project checked off my mile-long list. Woohoo! Annnnnnd DONE!

All day Saturday and most of Sunday were spent swimming around in yummy apple-red upholstery fabric as I navigated my way around my first-ever window seat cushion for my friend Jerusha.

I danced the tango with one GIGANTIC piece of oddly shaped foam and did everything short of standing on my head to shape the fabric around it to get what I wanted. I was so busy doing this, that I don’t have photos of the beast before it got a new outfit of juicy redness. Sorry ‘bout that. But look, I’m just pleased as punch that it worked out.

I started but finding the only large enough, clear area of floor space we have and quickly took possession of it by unfurling yards of this fabric and placing the foam piece on top to cut out my pieces. Then I busily scooted around it on my knees with a sharpie and scissors in hand (NEW scissors, muahahaha!). Because the shape is an odd one that a cover won’t easily slip on and off of, I decided to baste the bad boy first to determine how much could be machine-sewn and how much would require hand stitching.

In addition to all this, because the cover would not be removable, we had to come up with a plan to take care of a certain resident cat in Ru’s house that likes to give her opinion of things by way of piddling all over the place. The last thing we wanted was a sweet window seat cushion to be accessorized by a giant wet badge or two of cat piss. Enter the wee-wee pad cushion topper! 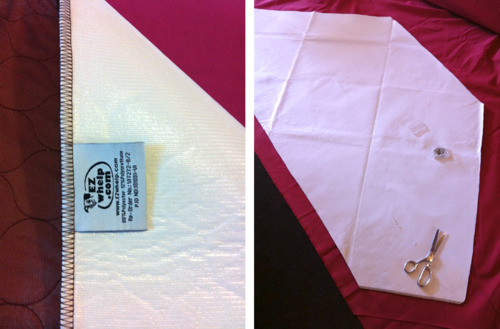 I machine-sewed the topper with a nice top stitch and then tacked the body of it down with a row of stitching placed 12" apart, to make sure nothing buckled or looked funky after any wee-wee laundering.

I ended up being able to sew up about two-thirds of the cover using my machine and then set up shop on the floor again to hand sew up the remainder. Setting up shop means bringing Mister Baby Pants over to lie on a pillow on my cross-legged lap while he snoozes and I juggle a giant foam cushion above his head without him waking up. Pulling and pinning and readjusting and undoing parts and redoing parts (now you see why there’s no tutorial on this? Hahaha. You’re welcome.), and I was finally on course to ladder stitch my way to the finish line, which in fact I actually had, as I was determined to deliver this Behemoth by 7:00 on Sunday evening.

After finishing both parts, I sat and admired my work, as I like to do (this can go on for an especially obscene amount of time when I’m overly gleeful about a successful experiment; It worked! I did it! See that? Look at this part! Did you see how I figured this out? Huh, huh?!?!). Then I hesitantly bent the whole thing in half and shoved it into a clear bag to transport it safely over to its new owner. A short drive later, and cheers of delight all around! Jerusha is happy and I’m happy it worked out pretty much perfectly. Woohoo! Now we’ll just see what kitty cat’s opinion is on the matter. Don’t forget to put that topper on, Ru! xoxo 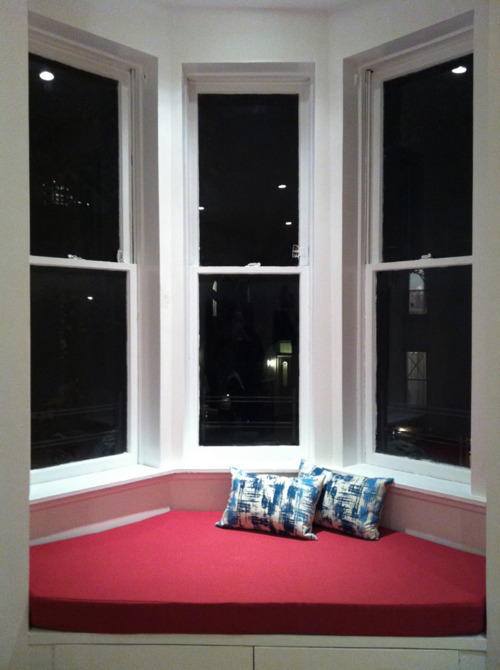