Well, it’s the last weekend in October and not only is it the official debut of my Timeless Treasures collections at Quilt Market down in Houston (woot!), but the weather is acting crazy, bringing us an unseasonably early snow storm.

This time of year, we have a huge local Halloween parade that’s second only to the one in Greenwich Village and since I was out of town last weekend, I’ve been focusing all of my spare time on getting costumes done in time for the event.

I love making our costumes from scratch: my eldest son rang in his very first Halloween as a wee garden gnome (yes, he does look like he’s plotting payback in the picture above), became half of a tandem skydiving team with his dad the next year and last year, he was a rabbit in a top hat with me as his accompanying magician.

Up until now he’s not been old enough to voice his opinion on what he’d like to dress up as, so this year, I was dead set on fulfilling his request: “Mama, I want to be an ORANGE fish!” This was followed by “Dada will be a pink fish and you will be a blue fish!” I made sure to quiz him again every few days, just to confirm that he wasn’t going to change his mind. Luckily, he hadn’t.

As per my usual, I made the whole thing up as I went along. I figured it was also be a good opportunity to bust out my new serger and learn how to use the bad boy. After initial concerns about losing my fingers to the chattering blades, I’ve now gotten very comfortable with the machine. Shoot, after a gazillion fish scales, I’ve become a pro! 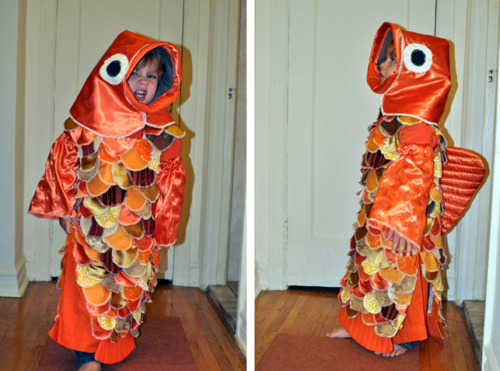 I used up a bunch of fabric scraps and built them onto a small kameez top I found at the local thrift store. Just cut the sleeves off, adjusted the overall length and sewed on fish scales galore. Added a back fin, tail fins and elastic-banded arm cuff fins. The head piece was the hardest to sort out, not only for aesthetics, but, as many of you know, a 3-year old is only going to put up with so much before crying out “I don’t wannnnna wear this anymore!” Also, living where we do, I’m conscious of making everything as insulted as possible since we’ll be walking outside for numerous blocks during the parade. So the head piece solution worked well being padded, for structure and warmth. Win-win!

As for little brother Mister Baby Pants, I decided that since there wasn’t enough time for all our fish costumes to be made, he’d at least round out the school of two by being…wait for it…a baby narwhal.

Again, I also made this without a pattern and just cut pieces out and adjusted everything as I went along. Baby was so patient with all the fittings; even more so than older bro. If I were to do it again, I would have made it looser, but heck, it fits. It fits! And it functions! I even sewed in two zippers for easier dressing.

Thinking again about walking in the parade, I knew I’d be wearing Mister Baby Pants in my baby carrier, so I chose to give him more pant-like legs with tail feet rather than a single tail so he could get into the contraption easier. His fins will definitely come in handy to keep him snuggly and warm on the walk. Mom and Dad’s costumes will be skipped this go around but we’ll hopefully have more time next year and try for another group costume idea. *Yes, that’s a drool spot in the top photo; what, you didn’t know baby narwhals drool?

With all that under my belt, I can now clean up the fabric and thread bits that are all over the place and tackle the rest of my to-do list (including taking some nicer outdoor photos of the boys in their costumes…if the snow clears up, that is!).