This marks our fourth year of participating in our local NYC Halloween parade. It’s always held on Halloween itself, so being a weekday this year made it a 5pm start time versus earlier in the day when it’s on the weekend. There’s a whole heck of a lot of effort getting the kids into their costumes and in positive enough spirits to walk the 10-15 blocks to the start of the parade route.

In hindsight, it would have been easier and more identifiable to have simply made Mister Baby Pants a narwhal fishtail slipcover that would have gone over his legs and carrier together instead of making separate leg flippers, but that’s just my obsessive crazy talk self-critiquing coming out. I’ll not harp and exchange that for deaming the entire thing a success! Both boys were champs and I think it was especially thrilling for my eldest son to have so many people respond so wonderfully to his costume. “Hi, Fishie!”, “Hey, he’s a FISH!”, “You look GREAT!” He was totally in his element and loved the whole thing. 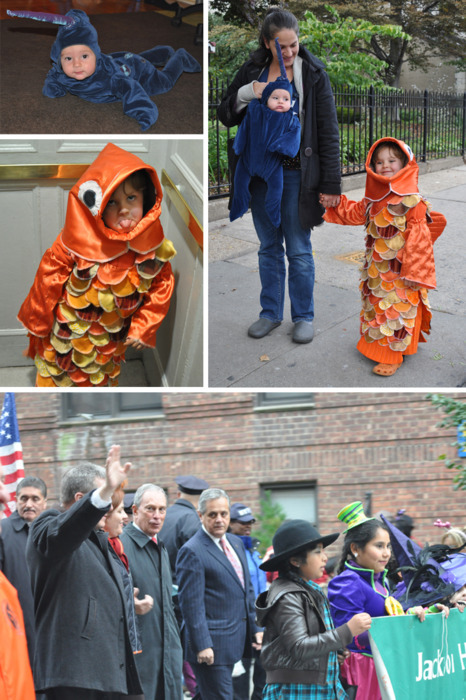 Mayor Bloomberg began the parade and as we started marching, the kids had the best time. Sometimes running, sometimes lagging behind, sometimes zig-zagging off to the left of the street or the right…kids in costumes were everywhere enjoying one of the most fun events around. And the parade is not complete without the man with the dyed beard and poodle. I don’t know his name, but he goes all out; evening putting a bird on it (who sits perched on his hat). He pretty much looks like this all year round, but puts on formal wear for the parade. He’s perfectly eclectic and wonderful.

Toward the end, Baby Narwhal was passed out in his carrier and Koi Fish (or simply Orange Fish, to my son) wasn’t into walking any more. Just in time, we got to the end where Trick or Treat bags of goodies were handed out. Halloween 2011 is in the bag. Can’t wait to see what we come up with next year. 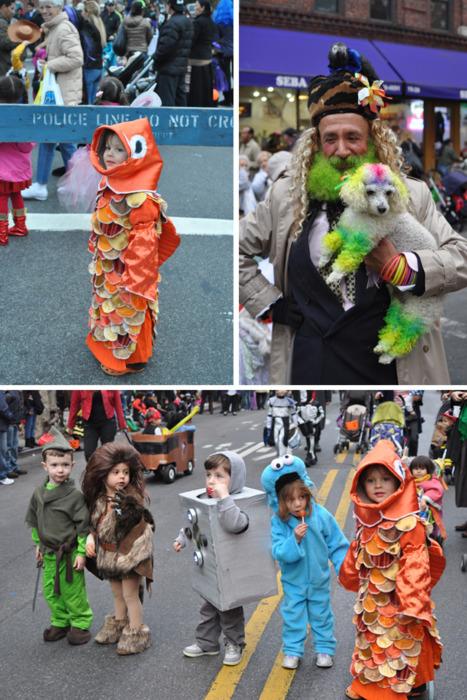