My Desktop, My Brain

I’m swimming in projects. I have a rubber swim cap on (yes, obviously one of the fancy ones with flowers all over it; I’d settle for nothing else) and am ungracefully doggie paddling my way through things I’ve started working on in hopes that I’ll conquer one or two of them sooner than later.

You would not want to see how hideously messy I tend to keep my computer desktop. Nope. That’s not a tease. I refuse to show you. You’d laugh at me. And point. And then laugh some more. So instead, I’ll tell you that I’ve reduced the size of my thumbnail file icons to teeny-weeny, and they’re STILL all over the place and doubling up on each other. Much like other people, I have a certain organizing disfunction, yet I’d know exactly where something is in my garish mess of a digital filing system if you asked me for it.

I also tend to keep windows open on my laptop. For ages. It’s some weird way of reminding myself about them for one reason or another (oh, be sure to read the comments here, and remember to submit an entry there.) Yes, I know about bookmarking and whatnot. And I do that. But I really seem to be an out of sight, out of mind kind of person these days.

As I type this, I currently have four Ai files open, ranging from a crudely drawn sheep and chicken, to some dogs on bicycles, whose background color I need to change, to some squiggly line work to the beginnings of some triangular geometric grid work. I also have scanned drawing files open in Ps. Some are alternatives to the Ai files, some are being readied to be brought into Ai. It’s madness, I tell you. My personal March madness.

In the middle of all this, I’m finishing up another recipe design, this time for roasted cauliflower. It’s not quite done yet, though it is waving at me every time I use my laptop’s expose feature and swoosh my cursor down into the lower right corner to reveal all the windows I currently have open.

The beginning of said recipe realized itself on paper, as I’m not yet over my kick of drawing up a storm. And I like my latest ink pens. 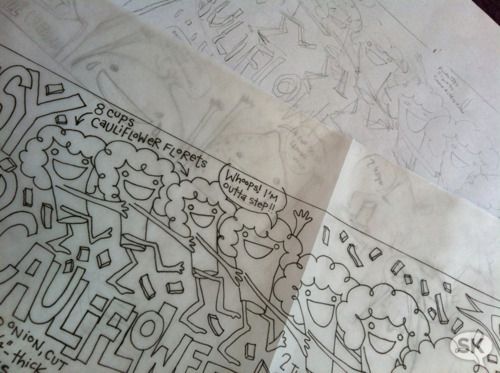 This a little of my what my real-life creative process looks like. Sketchy scribbly bits with good parts and throw-away parts. Tracing paper with layered segments of good and no good. It can quite easily resemble the frenetic madness of my computer desktop and who knows, I’m sure there’s some basic psychological correlation between the two, culminating in the grand discovery that I’m a messy-minded wildebeest on a creative tirade. Duh. No surprise there. Moving on.

To add to all this, there’s the mental sorting of how things should be constructed, placed, angled, sized and executed. Sounds precise enough. Sometimes better solutions come too late. Sometimes, Ps and Ai help me crowbar them in when there’s otherwise no turning back from a nearly completely inked drawing. For that, I’m thankful to my computer for all the time saved from not having to redraw and re-ink drafts. That, in return, affords me a bit more time to ponder things like what olive oil would say. 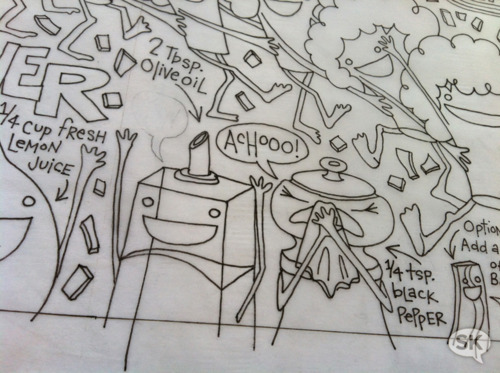 What the hey hey?

It’s not an easy puzzle to solve, I tell you. I really wanted the bottle to joyfully exclaim, “I’m a virgin!” because, well, that’s hilarious for olive oil to say. But not only was virgin olive oil not called for in this recipe (I always aim for accuracy), it was also a bit further than the rest of the recipe’s content wanted to go. I know this, because I asked the onion who immediately burst into tears.

So after exhibiting more spaced-out expressions while at the playground and asking a few friends for their thoughts, the answer revealed itself in one grand epiphany. 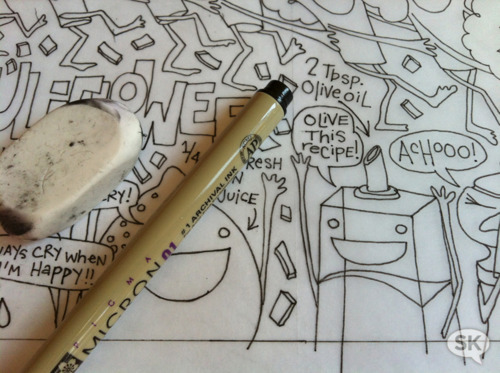 And with that now resolved, I’ve erased extra pencil lines and have now ventured back to the computer where, after coloring everything and attempting to bring my finished Ai file back into Ps, I’m having a parsing problem. Damn you, you damn dirty parser module, you!

No, I don’t really know what that means either, but it will require the assistance of my in-house IT guy (aka Hubby the Hubster). Until then, I’ll swoosh my cursor back and forth to see the gob of other things I need to get done. And maybe I’ll think about cleaning up my computer filing system.

I’ll think go back to thinking about what other cooking staples would say if I anthropomorphized them. Hmmm….