I feel like I’ve been in hiding. Or so it seems to me these last few days. I’ve been offline quite a bit while having my nose down, diligently working on my latest Spoonflower contest submission, due today. A Toile de Jouy based on the history of the town where I live.

And considering that’s New York City, this challenge had “potentially overwhelming” written all over it. Not only because toiles are notoriously detailed, epic displays of illustration, but well, where to begin when it comes to picking something from NYC’s hefty history? 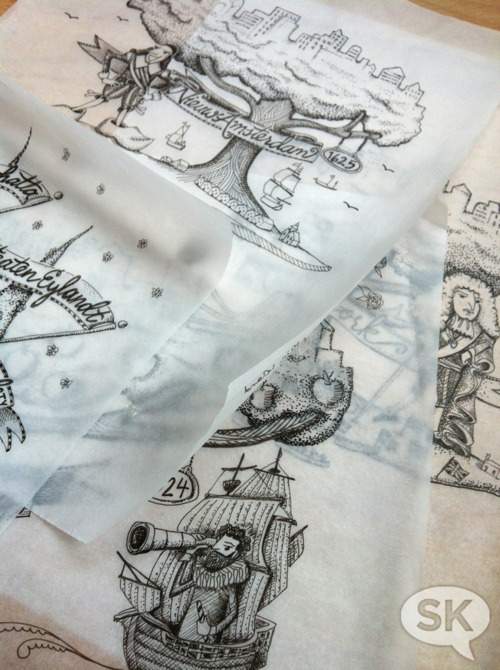 I couldn’t bring myself to jumping into the middle of time somewhere (I’m a weirdo for order that way), so instead I started at what we know to be the beginning. And besides, this way, I can create sequel toiles and just pick up where I left off last. 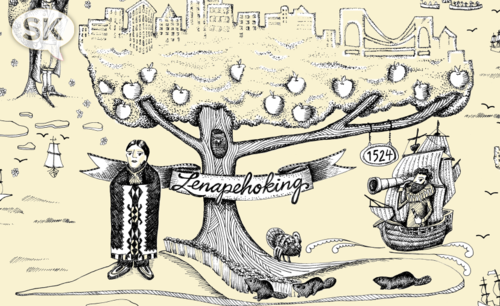 Here are four details from the new pattern, along with some brief descriptions:

The Lenape Indians first called New York home, more specifically, Lenapehoking, meaning “in the land of the Lenape”. Verrazano first saw them in 1524 (the bridge bearing his name today is depicted in the topiary tree top above him). The Lenape lived up and down what was later called New Netherlands and eventually New England. They perfected the slash and burn technique of clearing brush and were the first to mark a major route that we now know of as Broadway. Other symbolism I included are beavers and apples which are the state animal and fruit. 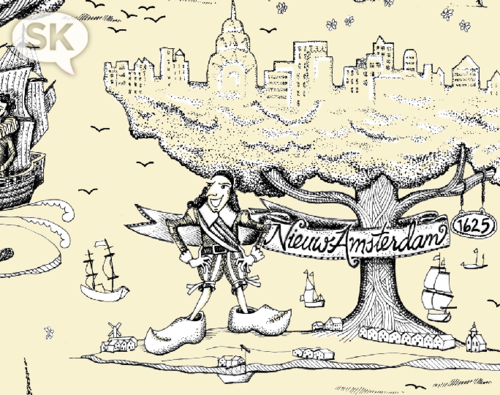 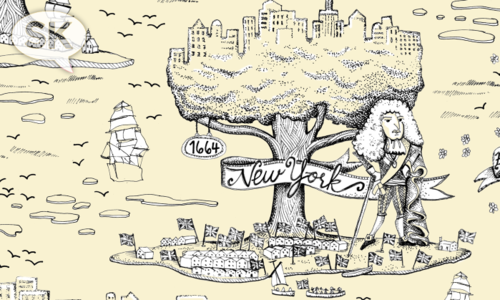 Peter Stuyvesant and the Dutch called it Nieuw Amsterdam when they settled in 1625. And in 1664, the English took it over, naming it after James II of England, Duke of York. 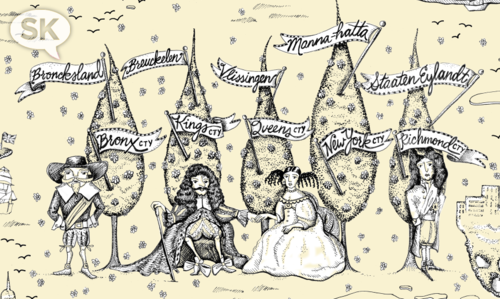 And that’s just the broader naming changes. When we get into the specifics of the five boroughs of New York City, their individual histories boggle the mind even further.

The Bronx was once all land belonging to Dutch settler Jonas Broncks (Broncksland).

What we now know of as Brooklyn (once called Breuckelen, then Brockland, then Brocklin, then Brookline, then Brookland…can you keep up?) makes up Kings County, which was named after Charles II of England, brother of the Duke of York.

Parts of Queens still possess names that the Lenape, Dutch and English gave them. For example, the Dutch Vlissingen is now the English Flushing (which sounds way less attractive in my book). Queens County itself was named after Charles II’ wife, Catherine of Braganza.

Manhattan, part of New York County, gets its name from the Lenape’s Manna-hatta, the “land of many hills”.

And to finish it all off, I sprinkled in some current New York cityscapes in topiary form along the treetops to show some of the new as we know it, along with all this history.

Did your brain explode? Because I think mine did while researching and executing this and all I want is to take a nice long nap after biting off this chunk of subject matter and attempting to chew and swallow it gracefully without upchucking and leaving a horrible mess all over the place.

In the meantime, you can see the finished pattern here. Voting opens on Thursday, so check back and vote for your favorite entries then!