With a lot going on at the moment, it should come as no surprise to anyone who knows me that a full workload doesn’t quite stop me from taking on MORE stuff to do.

So when I went into The Bub’s school the other morning, just minding my own business admiring this festively decorated tree in the front entry way… 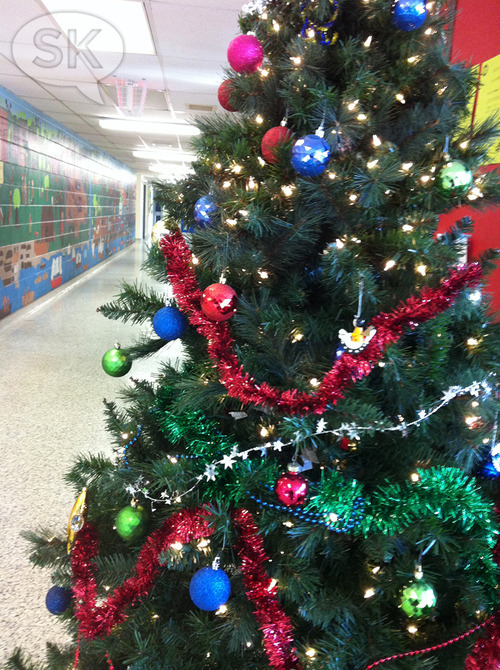 …I didn’t expect to see this…just over to the left stood a fresh cut, beautiful undecorated tree flanked by a couple of boxes and a big handwritten sign… 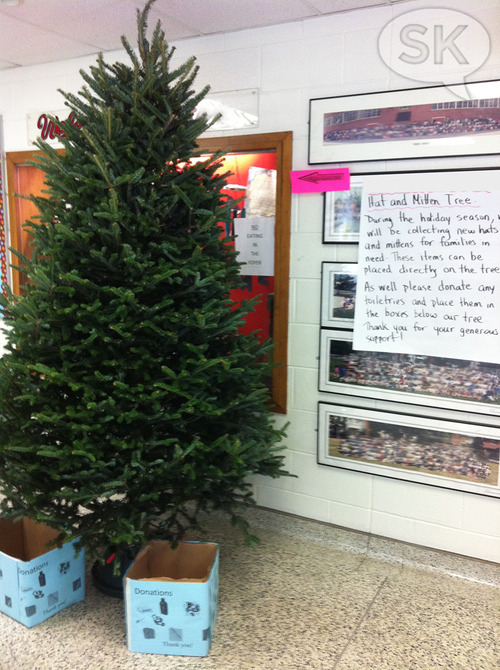 Upon closer inspection, this is what it read: 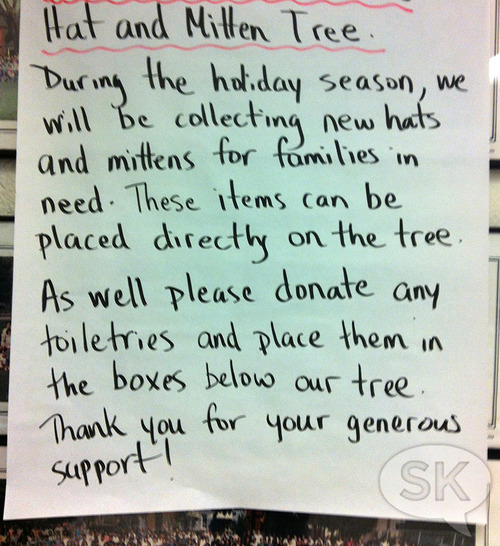 Really and truly. A bare tree in the foyer of the school, just waiting to be decorated with donations. What child would not want to participate in helping decorate it!?!?! As a friend put it, it’s like a ever-changing interactive art project!

So good. So good.

Does Samarra think to run out and buy some mittens and hats to donate? Pffft. No. Too easy, people. Too easy. (I’m like that cat you have that can’t just play with the mouse toy with no obstructions; I’m the one who has to contort myself upside down into an open dresser drawer and wave my paws around blindly in the air just to make things more difficult and up my mouse-playing stakes. On the outside, this looks foolish. But we insider cats know we mean business).

Anyway, what did I do? I opted TO MAKE SOME mittens and hats!!!!! (<–*read in sing-song Oprah voice)

*drumroll and let the crazy house know I’m on my way!*

Having been on a knitting kick recently, I initially though to knit a bunch of stuff. However, having never even attempted knitting a mitten before made me realize this was a far-fetched notion if I were to actually finish them during this calendar year.

Par for the SK course, people, par for it. I like to shoot for near-impossible and scale back whenever necessary.

So instead, I decided to sew up our family contributions.

I chose some wacky fleece fabric. The kind of wacky that I wouldn’t pick to wear now, but if I transported myself into the 5-8 year old version of me, I’d be falling over myself at the chance to coat my head and hands in a bunch of silly bears, cats and dogs. 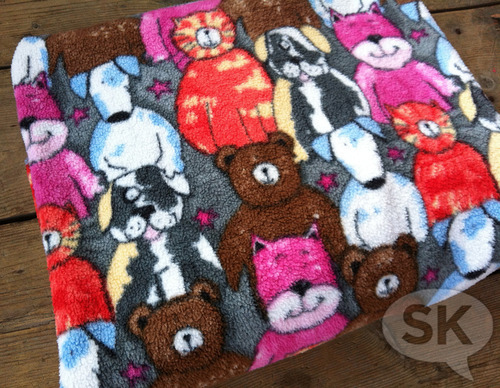 I made up the hat pattern on the spot but did find a mitten pattern online to loosely base the lined gloves on. Making them was kind of addictive, I have to say. That’s all I need. Mini mitten factory, much? 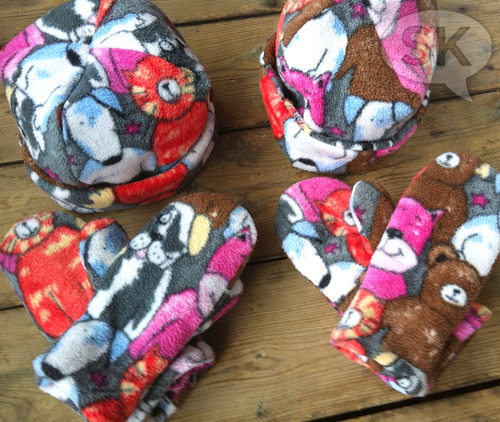 In the end there were two hat and mitten sets and one random tiny hat, suitable for a baby. We went to school the next morning and The Bub requested that the tiny hat be put as close to the top of the tree as possible (as the tree was already touching the ceiling so the top spike wasn’t an option). 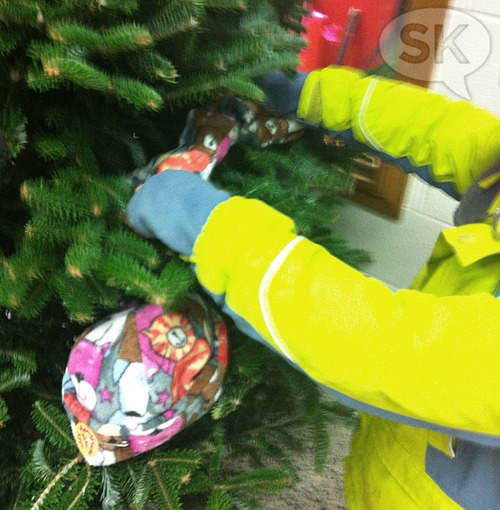 He then happily hung our remaining contributions onto the lush branches. He chose each spot carefully and took a little time arranging everything to his satisfaction. 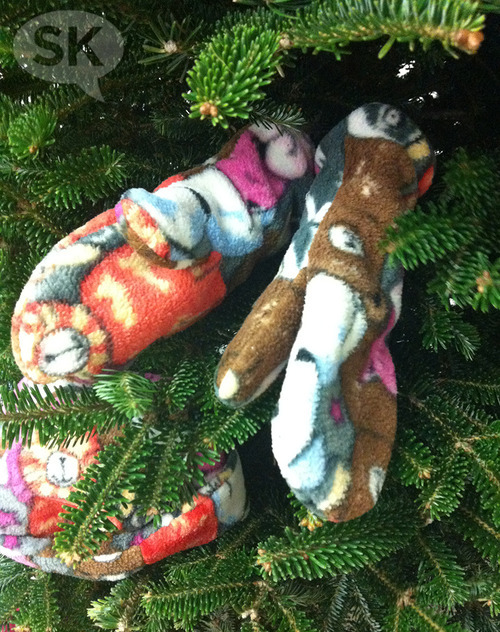 What a great project to participate in. To see the tree filling up is a thrill too. Let’s keep ‘em coming, kids! 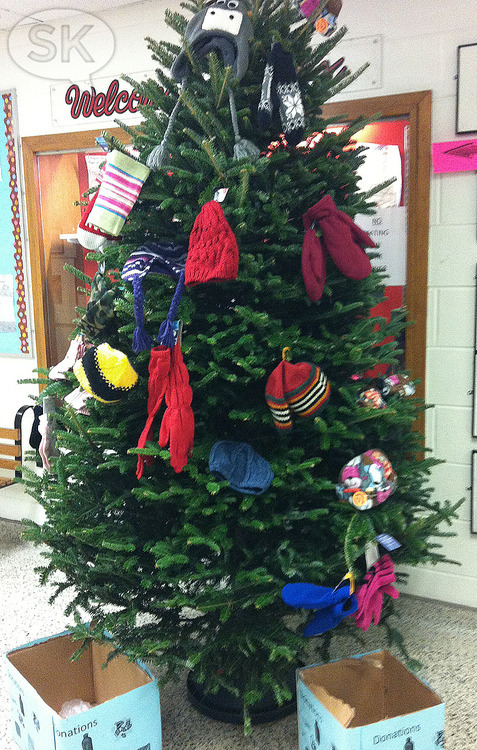 My biggest takeaway? This is an AWESOME donation idea, so if your school isn’t doing something similar, contact the administration, go get a tree, write up a sign and get crackin’! 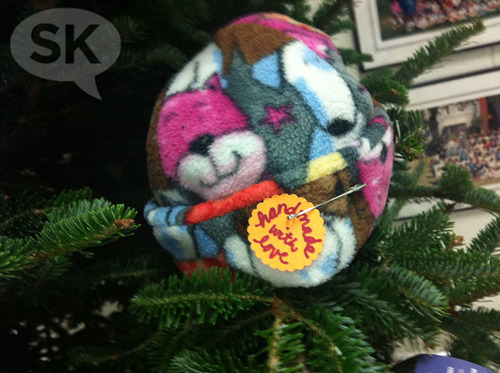 Because it IS the giving season!!