The Bub turned a whopping F-O-U-R the other day and as with last year, I asked him what kind of cake he’d like to have for his party, as I’ve somehow decided this needs to be added to my Let’s Tackle This Because There’s Not Enough On My Plate list.

So I posed the question: “Hey, Bub, what kind of cake would you like for your party this year?”

The solid, unflinching, and incredibly certain reply, “A triangle cake.”

On the one hand, I was completely blindsided. On the other, I was never more certain he is my kid.

So I began plotting my course to cake victory.  No, no, no, it couldn’t merely be a flat, layered cake with three vertical sides lopped off to form a triangle when peering down at it.

So, my friends, when the day neared and I was in full party-planning mode, the story of Triangle Cake 1.0 began: 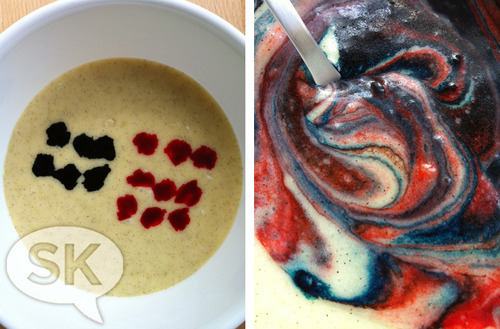 There was no mention of colors, aside from orange and yellow, so I single-handedly upped the ante and thought I’d attempt some version of a multi-colored rainbow cake.

With food dye in hand, the science experiment began… 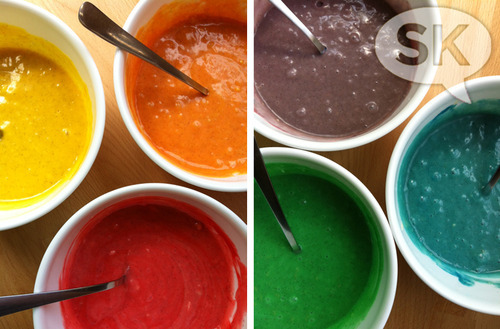 I swear it tasted good, but you’d do best to keep your eyes closed. Unless of course, you were part of my specific target group, because this was a full blown toxic color explosion of sheer madness that only a bunch of 4-year olds would truly appreciate.

Colors were mixed and it was just a matter of how best to pour them. There was no way I was baking one color at a time because that would take too long. Hello, I’m not CRAZY. 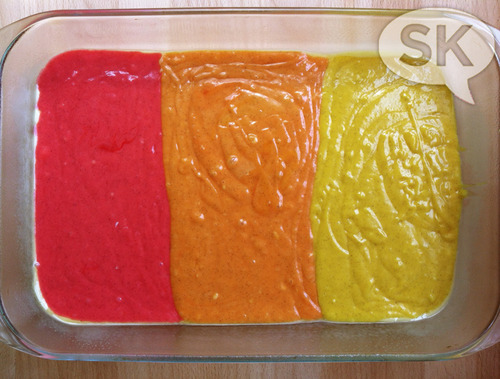 I decided I’d cut down the baking time by cramming three colors into one dish all at once. Art + science in action and a mad pastry chef at the helm. 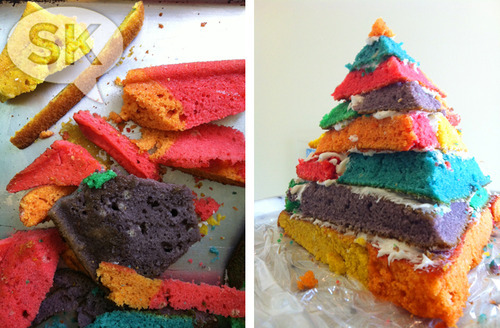 Did I mention this triangle cake was going to be a pyramid?

Oh yes, indeed. I knew right away when The Bub requested a cake shaped like a triangle that this mama had to go completely overboard and icing-mortar her way to a rainbow-bricked vision of great proportions.

The party had to be resheduled. And Triangle Cake 1.0 sat, unfinished, in the fridge. Part of it was lopped off, then iced and poked with four candles on the actual day of The Bub’s birth. Feeling under the weather, he blew out the candles, made a wish and devoured all the icing before wanting to go to bed.

As the days crept towards the following weekend and everyone was one the mend, I ramped up uhhh-gain, to create a second triangle cake for the rescheduled birthday party. 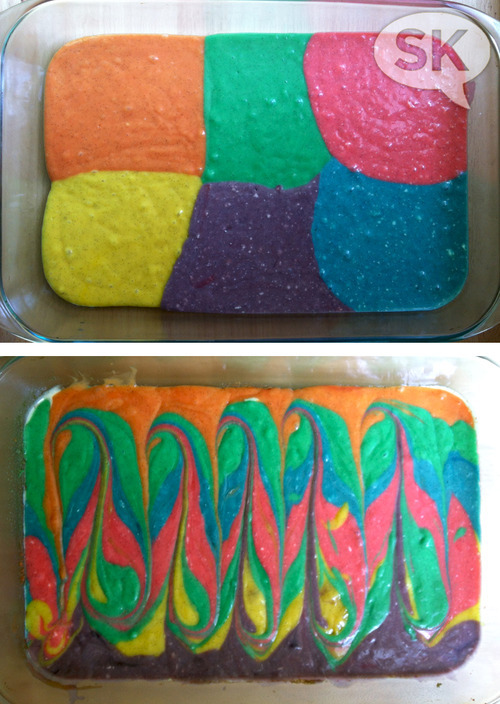 One thing to know about me is that I really don’t like having to do something more than once. Not because I can’t, but because the spirit and excitement is somehow lost and more times than not, it rarely turns out as good as the first go around.

Knowing that, I opted to not leave well enough alone with Triangle Cake 2.0. I meddled with the pouring process and crammed some of each color into one tray and swirled it around like I was making marbleized paper. 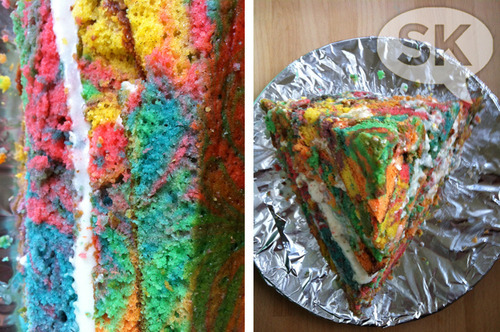 The result was more grotesque than Triangle Cake 1.0. Perfect for 4-year olds. And nothing short of disgusting for me to look at.

Delirious with the feeling that I was creating a horrific Franken-cake, I continued mercilessly cutting out tapered triangles and stacking them higher and higher in an icing-slathered fruit-loopy pyramid. It leaned a little this way and a bit that way.

The kitchen was hot and I was starting to lose my marbles. Instead of adding the 3-4 teaspoons of milk to my frosting mix, I mindlessly poured one gigantic cup of milk into the mixture, rendering the entire concoction useless.

Here I was, almost done with the inner cake structure and had just squandered away a huge bag of powdered sugar because of PF (pastry fatigue).  I really just wanted this darn thing done and wasn’t convinced that it wouldn’t end up a repulsive mess that everyone would feel obligated to sample while silently grimacing.

Halfway between cackling and crying, I asked my husband to please go out to the store because we needed even more powdered sugar and more butter. To stop from freaking out any further, I put the sloppy cake pyramid into the fridge and backed away from the kitchen. 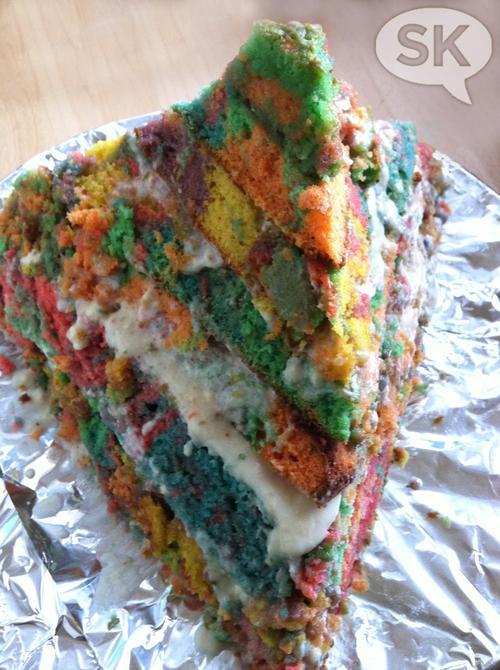 Turns out, that was a great idea. Chilling the entire monstrosity made it firm enough to be sculpted and chiseled into a perfect pyramid, using a trusty bread knife. So all the curves and wonky parts you see above were ever-so-smoothly shaved off.

I don’t think I have any photos of the un-iced cake part looking all purdy because I was too excited about covering the whole thing up and sending it out of my kitchen as soon as possible.

I mixed my gazillionth batch of buttercream icing and began spackling the daylights out of it. Next up was throwing, and I mean throwing, oodles of nonpareils (hey, am I the only one who grew up knowing them as “hundreds and thousands”?) at each of the three sides.

It was chaos. Tiny candy balls everywhere, and where I couldn’t see them land, I could certainly hear them land. On the counter. On the floor. Pinging against the front of the stove, bouncing this way and that; they were all over the place. 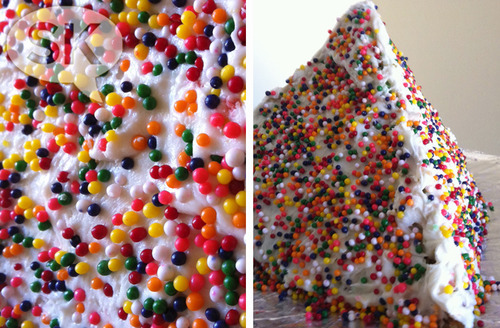 But who cares, because the Franken-cake was finally starting coming to life now. Muahahaha!

I’m telling you, good people, I cannot sing the praises of icing any louder. It truly does make just about anything look pretty. 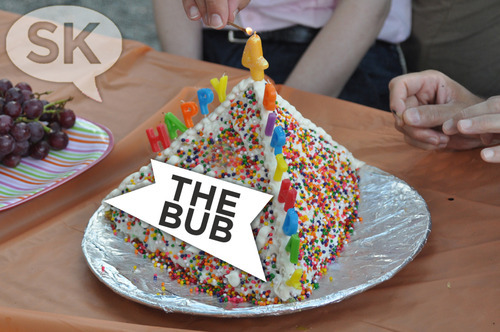 And like a sugary phoenix from the ashes, a beautiful 4th birthday cake emerged… 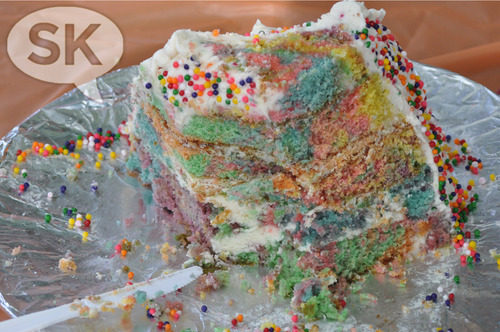 …and was then gleefully consumed by everyone. Double-yay! 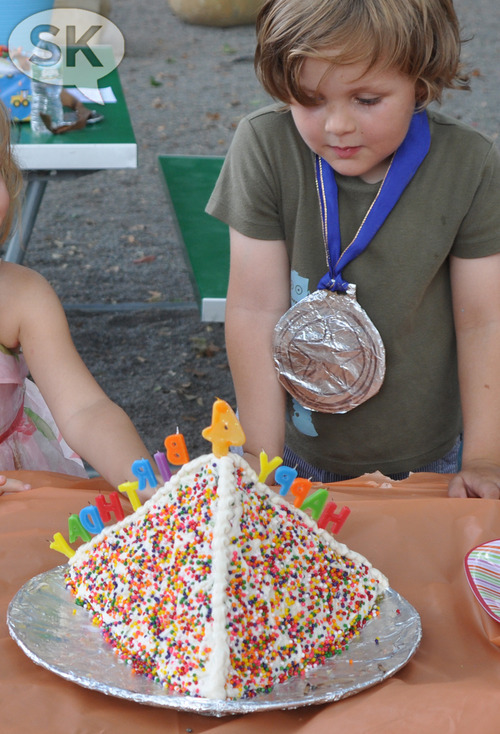 Another mission accomplished and another grand birthday celebrated. I just wonder what my personal tiny art director will think of next year.

To be perfectly honest, I can’t wait for the challenge! I’ll never learn. 🙂