Crafting with Kids (and Actually Enjoying It!)

When you look around the blogosphere for kid-friendly Valentine’s Day craft ideas (or any other theme, really), it’s hard not to lose your mind over things that, although pitched as being *great projects for little kids!!*, are in fact a total recipe for disaster.

A lot of the latest uber-crafting DIY standards seem to have been set too pristinely high for most little kids and their parents to actually have a good time together while making stuff.

That ugly underbelly of crafting with kids is rarely if ever included in the beautiful naturally-lit tutorial photos posted. Where are the pictures of kids screaming and protesting? Or crafty collateral damage pics of puddled gobs of glue dripping down a chair leg? I want to see documentation of furrowed parental brows and mangled up frowns full of displeasure that all this was all an incredibly bad idea and it just feels like a giant chore now. Because, I sense, there are more scenes of those images than anyone wants to admit.

Don’t get me wrong, I love to see the DIY project ideas and photos that are floating around the internet. They are inspirational. They’re just not quite real. Not in my current world, anyway.

The cold hard truth is that most little kids (maybe just most of the ones I know, and I am talking 4-yr olds or younger) will inevitably lose interest before getting even halfway through these projects, leaving frustrated moms and dads to frantically step in and finish the darn things themselves. Tense hen-picking and snapping can ensue and truly, it makes the entire experience simply nooooo fun at all. 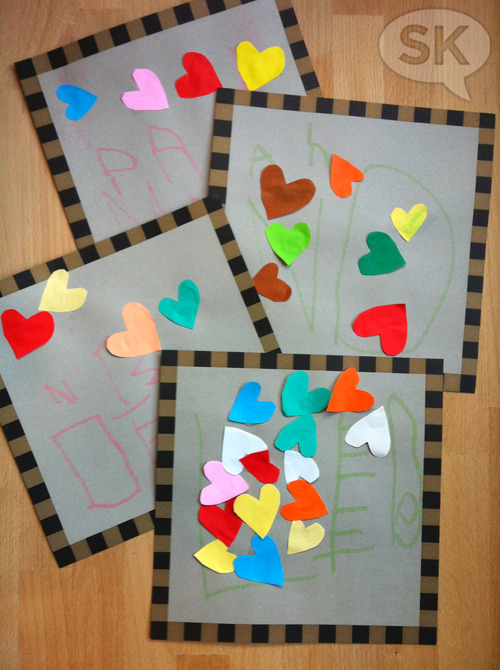 So in the interest of sanity and keeping the creative spirit alive for everyone involved, I gathered together some of my fancier stationery and origami paper (in an ongoing quest to lighten my paper load and use up what we already have), an enticing bottle of it’s-gonna-drip-everywhere glue (we’re wild and crazy like that) and The Bub’s tub of colored pens (I really need to throw out the drier ones, because somehow those were the ones that got used) and let my kid go to town, practicing his writing skills and gluing cut paper hearts wherever he darn well pleased.

I did have moments where I felt myself tense up at the sight of things seemingly going awry in my eyes. But I made a giant effort (I do love to control things, so I mean GIANT effort) to let him do what he wanted. Sitting back and appreciating his creative vision at work was truly my pleasure. At one point, after writing what looked to me like an extremely tall and many-limbed “E,” he exclaimed gleefully, “Seeeeee? That’s a whole stack of E’s on top of each other!!!!” 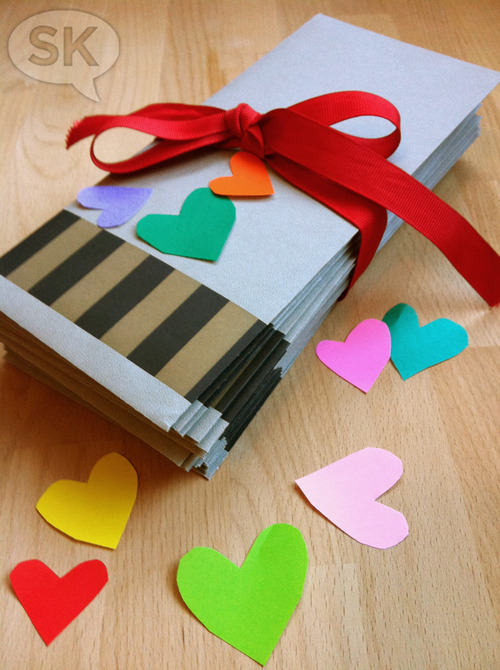 Who knows. We might try one of those fancier DIY projects in the future. I’ll never say never. But for now, activities like this are all about my little 4-year old kid having fun and expressing himself without someone else’s vision clouding the way (and this mama possibly going a tad bonkers in the process).

After all, these are his cards, made by him, for his classmates. And I think they turned out beautifully.